Meet Travis and learn his incredible true story. Travis worked as front-end manager at a food co-op around the time a much-loved artisan bread-baker stopped supplying his wares to the store. Oh, the complaints Travis had to listen to from faithful bread customers! As he listened, an idea formed in his mind: He, Travis, would fill this gap. He would learn to bake bread. He wasted no time. He tested recipes in his home kitchen, while studying for his certified food manager’s certification. Next, he fulfilled every requirement he needed to set himself up in the bread-baking business. Thoroughly committed to this huge lifestyle change.  Stay tuned to find out how the role a shared kitchen played in Travis’s Bread-Baking Business. 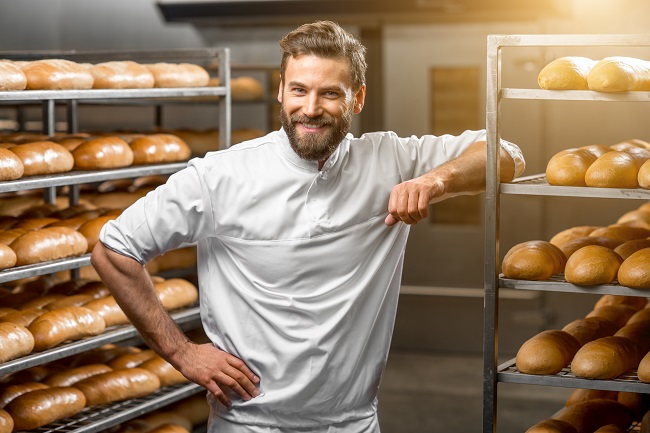 The way to a customer’s heart

Travis handed out bread samples to staff and to customers he had befriended and asked for feedback. Their comments and suggestions helped him tweak, and improve, each recipe. He started taking orders. A mere 20, at first, at $5 per loaf.  Word spread, and demand grew. But his home kitchen did not and could not. The entrepreneur worked out an arrangement with his employer, the food co-op, to use their commercial kitchen when it wasn’t in use, and they would buy all that he baked.

Within nine months, Travis’s reputation had exploded. The bread-baker extraordinaire had outgrown his home kitchen, and now the co-op’s kitchen. He would be forced to find a larger space. But where? He heard about a shared kitchen nearby, toured the facility, and signed a short-term lease. He left the food co-op on good terms, continuing to supply them with weekly bread deliveries. Customers hurried in on delivery days to swoop up one or more loaves. After all, everyone loves eating a slice of comfort food, and isn’t that what good bread is? Travis never hesitated to ask for suggestions and feedback from his customers. He wanted them to want his bread. Big growth awaited this one-time food co-op front-end manager. He simply loved what he did – and customers could taste that love in every bite.

Had Travis lived near Plano, Texas…

… he would undoubtedly have found The Cookline, a 6,000-square-foot-kitchen-and-office space, and his business would have grown faster. He would have met with owners Renee and Kevin Spratlen to tour the facility. Since he already had his certified food manager’s certification and he carried general liability insurance — both are required of lessees — he could have signed a six-month lease and paid the $300 deposit (all but $50 is refundable) on the spot. The hard-working Travis would have welcomed a facility open year-round, 24 hours a day, viewing it as a fast-track to the growth he knew was headed his way.

The event room would have appealed to Travis, as well. An affable guy, he likes nothing better than hosting special events. Of course, he would serve his bread to hungry event-goers! Shared kitchens are the ideal way to start a food business. His is thriving, thanks, in part, to the shared kitchen he leased. If you’re looking at starting or expanding a baking or cooking business, contact us.