Downton Abbey popularized afternoon tea for Americans everywhere, but Anna, the seventh Duchess of Bedford, deserves credit for starting the tradition. The Duchess began a habit of enjoying tea with bread and butter, and small biscuits in the late afternoon. She invited friends to join her, and afternoon tea became the thing that one did in polite society. Second only to water, tea is the most consumed beverage worldwide. Its popularity spread across the ocean to the United Kingdom and into King Charles II’s court by his wife, Catherine of Braganza. In the early 1800s, when tea prices dropped, more people enjoyed drinking tea, including the Duchess of Bedford. In the United States, coffee became the beverage of choice to rebuff the influence of British culture. Tea was an expensive import and came to symbolize much of what early Americans disliked about English rule. Many people associated drinking tea with wealth and having time to waste. It wasn’t until the early 1900s that afternoon tea became popular in America. Whether in Britain or America, afternoon tea not only provided sustenance but also time to gossip. If a man attended, it allowed a woman to assess his manners. Countless books from the mid-1900s to today discuss tea etiquette and proper attire. 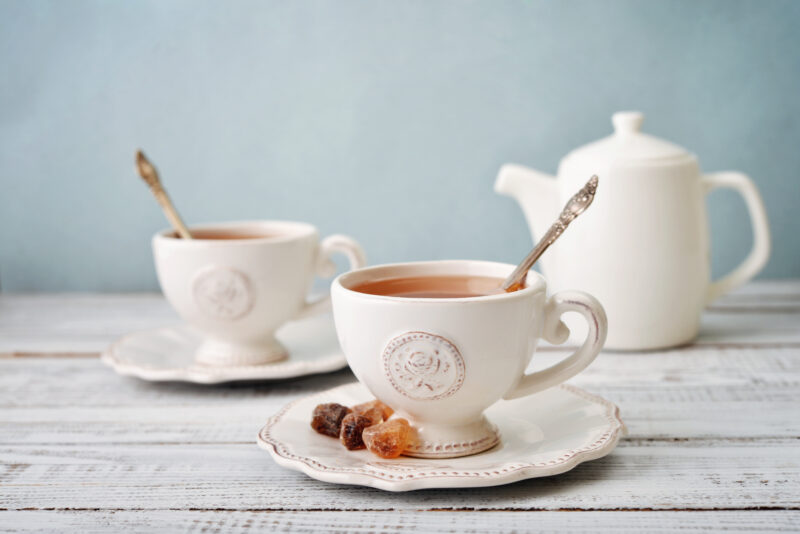 What is high tea?

Cookbooks of the time introduced week-long menus for both afternoon and high tea. In Britain, high tea or ‘meat tea’ often included various types of meats, bread, cakes, jams, and fruits. It was a substantial meal, not a snack and enjoyed after work instead of in the middle of the day. The British served high tea at a dinner table instead of a coffee table, which is the location for a traditional afternoon, or ‘low’ tea.

What time is afternoon tea served?

The Duchess started this tradition because she was hungry in the late afternoon. Dinner was an evening meal served after seven-thirty or eight o’clock. Many women of her stature retired to their chambers around five o’clock and this became the time the Duchess hosted afternoon tea. Now, you can enjoy afternoon tea anywhere between two and five o’clock.

What is a typical afternoon tea menu?

When the tradition started it might have included thinly sliced bread with butter, hot scones or toast, and maybe something sweet. Before long, the menus expanded to include cakes, cookies, fancier scones with clotted cream, and dainty sandwiches. Many cookbooks highlight delectable recipes that include beautifully decorated treats served on three-tiered trays accompanied by equally fanciful china. Here are some suggestions for your menu.

At The Cookline your guests will enjoy your tasty treats and teas in our spacious event room. It comfortably accommodates up to 30 people. The event room, near our fully equipped kitchens, makes getting food ready to serve simple and easy. We also offer ample storage for keeping all of your menu items at the correct temperature. To learn more about renting our event space to host your afternoon tea contact us. We look forward to giving you a tour.